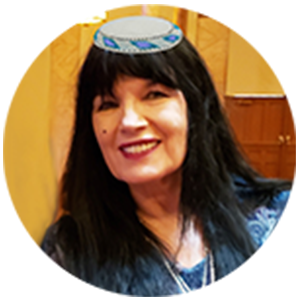 Rebbitzen Andalin is an award-winning flutist, having received among other awards, the prestigious national Selmer Award for Excellence in Jazz Performance. She was looking for her soul-mate when Alan appeared on the set of a CBS television show Promised Land. (She will tell you the story.)

She graduated summa-cum laude with her bachelor’s degree in business the week she met Alan! As she is a paralegal and Alan an attorney, both are Jewish, both are professional musicians, and both are parents of children the same ages, it was beyond love at first sight, and the two were married five-weeks later under the holy chupah within Rabbi Sarah Leah Grafstein and Steve Klemow’s Sukkah!

Fast forward 25 years, and Andalin’s bio mirrors Alan’s in community service and involvement including web work for the Interfaith Roundtable and NAIN, and countless live musical performances in secular, Jewish, and Interfaith worlds. Intuition and talent have allowed Andalin the foresight and strength to accompany Rabbi Alan through this journey.

She emerges with her own set of new musical skills including vocal and indigenous flute work, a deeper understanding of renewal Judaism, and as a partner and emissary of light on this path. We welcome Andalin, on the wings of Shekhinah, as a musician and light-worker with Spirit of the Desert. Here she compiles and publishes our weekly newsletter, and she expects to become involved in the ongoing care and development of our website.